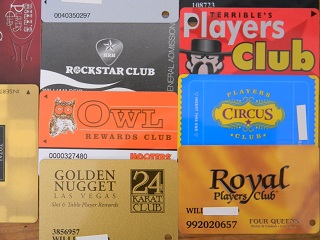 Earn Free Rooms in Vegas?
Yes, You can and a lot easier than You think. How?

Play with a players card, Every single time you gamble.
Playing for just a few minutes? Not worth Your time to pull out your players card? Don't want to stand in line a few minutes because You lost your card or never had one at that Casino? Do You use Your seat belt when You are just a block away going to the Store? As You know you can get in an accident a block from Your House just as easily as on the Interstate. Same goes for the Players card. You think You are going to drop in a 20 dollar bill and play a few minutes, How many times has that actually happened? Probably few to never!! Suddenly You start winning and You start betting a little or a lot more and 25 minutes later You think, Wow, I should be getting credit for this. Or worse You lose the 20 dollars in 30 seconds so You have to get it back, You check your wallet and all you have is 100's but You don't care, You will put it in and just play 20 of it, right? Wrong!! You fly through that 100 and now you are 120 down and guess what? No one knows about it but you. The Casino just thinks You are just someone taking up space. Nothing hurts worse than losing money except losing money and not getting an offer for a free room later.Las Vegas Casinos are giving away rooms like crazy right now, You absolutely must be very disciplined about using a players card for every dollar You spend.

What can I get by using a Players Card?
Some Casinos will give you something before you even play. Players coupon books that include discounts at buffets or even a Tee shirt. The big guys (Total Rewards and Players Club) won't give you anything in advance but You will quickly start getting offers for free or deeply discounted rooms even if You are an average player.

Don't want to carry a million players cards?
You don't have to for a few reasons:
You can use the same card for three of the biggest Casino groups:Harrahs Total Rewards Card can be used at Harrah's, Bally's, Caesar's, Flamingo, Paris, Rio, O'Sheas, Imperial Palace and now Planet Hollywood. Bill's is part of that group but right now They have a separate card for some reason.
MGM Players Club card can be used at MGM Grand, Mandalay Bay, Luxor, Excalibur, New York New York, Monte Carlo, Aria and Bellagio.
Station Casinos have a card that can be used at many Casinos off the Strip and Downtown.
So You will not need a card for every Casino. Are You the type that likes to play in many casinos but You can't keep up with your cards? You can always get a duplicate free. It takes a few minutes, very well worth it, You don't know how much credit You might miss just to avoid standing in the players club line for a few minutes.