Recent events in Las Vegas have worried tourist about safety in Las Vegas. Nothing has changed in Las Vegas to make it less safe than it was before. The recent Shootout was an isolated incident that regretfully, took the lives of innocent People. This was a incident that was between 2 People that ended up including a few more. It happens often in other tourist areas all over the world and if I had to pick where I would feel the safest at 4am it would be the Las Vegas Strip.

Is Las Vegas Safe? For Tourist, the answer is very easy, YES! Las Vegas has 2.5 million people arrive every month by air not to mention all of the people that arrive by car. Explore these facts:

Does Las Vegas have crime outside the tourist area? Hell Yes, Every heavily visited City does, but unless you leave the city to make a drug deal or hook up with a prostitute you are very safe. Be assured in the Tourist area the Casino Security and Las Vegas Metro puts millions of dollars in man power to make you safe. Las Vegas is a very safe place to visit. The official crime statistics are not that great but most of that crime is not in the tourist areas or inside the Casinos. When you are inside any of more than 90 Casinos in the Las Vegas area you are probably as safe as anywhere on earth. But there are areas to avoid and things to do to make your vacation safer.

Your safety in Las Vegas can be greatly improved if you follow these simple steps:

CASH
Keep cash in a front pocket if possible. If you must carry cash in a purse put the strap across your chest instead of just on the shoulder. Never flash large amounts of cash, be aware if you win big at a table you might be watched by someone that wants to take that money. If you are alone it is highly recommended that you use the Hotel safe or ask a security guard to walk you to your room and use the room safe. If you are not at your hotel take a taxi instead of public transportation. If you are in a group you will be much safer but still keep that roll of cash in your front pocket. Pick Pockets are much better than you think and bumping into someone on a crowded sidewalk is very common and that is the method they use to get your money. You are always safest when inside a casino, crooks know that they are on camera from 10 different angles.

PROSTITUTES/ROBBERS
If you have won a lot of money or even if you are seen counting large amounts of money be aware that the many prostitutes that are cruising around looking for customers might approach you with a scam to get you to buy them a drink, like telling you how attractive you are and how lonely they are now that their boy friend has left them for another girl. Many crimes have been committed this way by drugging the victim and stealing the money He was flashing but many of these crimes are not reported out of embarrassment. If you have a load of cash and a very attractive girl gives you her sales pitch, she is going to have the upper hand unless you are cold sober and on to her. Just remember to be on the lookout for anyone being your friend just after you won big on a table or you flashed cash.

TRANSPORTATION
Taxis, Monorail, Buses, Shuttles are all very safe forms of transportation but use common sense when choosing which method. If you are traveling as a single female and want to take a Taxi ask for a female driver. If you are with two or more people there is not much risk in your safety in any of the mentioned transportation methods.

WALKING
Walking is safe everywhere during the day on and around the strip and around downtown. However, Night is a different story. Only walk in well lit busy areas at night. Avoid the area between Encore and Riviera on the East side of the Strip and Fashion Show Mall and Circus Circus on the West side of the Strip and do not walk south of Excalibur or Tropicana, If you want to go to Luxor and Mandalay Bay do so by going through Excalibur, you can get to both while walking inside. Avoid going to the Near Strip Hotels at night unless you are with a group of people, there are lots of homeless and desperate people laying in the bushes most nights. They are usually harmless but you never know what state of mind they are in. Do not leave Fremont Street at night unless you are with a group, there are plenty of dark dangerous areas just off Fremont.

ALCOHOL
It is easy to drink more than you usually do around all the excitement in Vegas. This will cause you to forget all the safety points mentioned here. It is a very good idea not to drink heavily if you are alone. You will have a very big target on your back if you are noticeably Drunk. It has happened to the best of us. So, before You go from buzzed to drunk, think about where You are, where Your money is and if possible be with Someone that isn't drunk. If You are sure You are going to get drunk, it is safer to do so at Your hotel and after You have put away Your money except for the amount You need for that period of time.  Also, on a health note, you should drink a bottle of water between every two drinks, dehydration is a major side effect of alcohol.

PANHANDLERS
Panhandlers can be found all over Las Vegas and 99.9 percent of the time will not cause you any trouble. If you want to give them some change, have that change in your hand well ahead of time so you don't risk dropping bills or coins as you approach them. If you don't want to give them any money just look forward without making eye contact and maintain your pace.

BE REALISTIC
This is not about your physical safety but your financial safety: If you don't get approached every day in your home town by random strangers that tell You how good looking You are, then You probably aren't. Vegas has the most Beautiful Women in the world hired to make you feel "special" then close a sale. That sale might be Sex, a condo, time share, show tickets, club pass, etc.. Just be on guard. Its mostly beautiful women selling themselves to men but lately They are targeting rich women by using young hot guys. Do You think when you shoe your wife away that she is going to sit by the pool or shop? Maybe She will but be aware about male Prostitutes, They do exist. 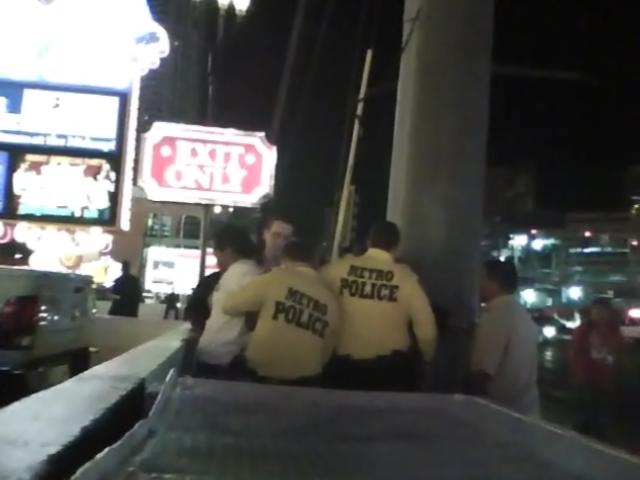